HSNM is sponsoring a panel discussion on October 26. For a downloadable version of the flyer, please click OctTalkFlyerRev. 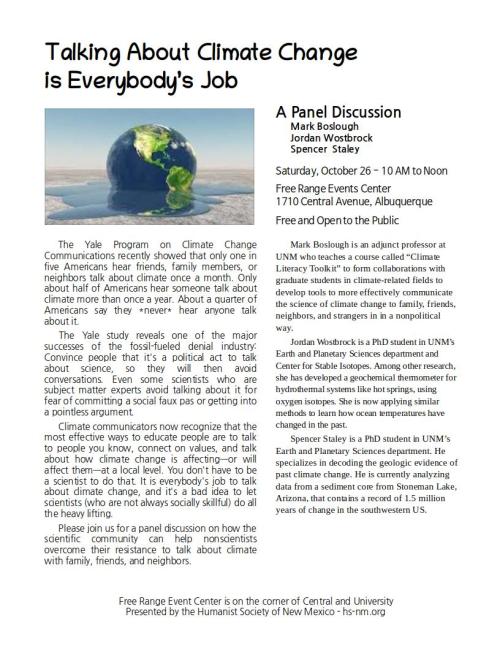 Winner will receive a scholarship to attend CNM

graduating high school students who want to attend Central New Mexico Community College (CNM). Students are asked to submit an application form along with an essay of 600 to 800 words on any aspect of humanist values. The application form and complete details are posted on the HSNM website, hsnm.wordpress.com, along with information about humanism, and links to local and national humanist resources.

The selected student will receive a scholarship grant to cover the first year of tuition at CNM, renewable for a second year if the student maintains a 3.0 average. The winner may enroll in academic or certificate programs. The contest is open to any student in the Albuquerque school system who will graduate before the start of the CNM fall term. The selection will be made by a committee of HSNM members (relatives of the selection committee or HSNM board are not eligible to enter). All applications are confidential and will not be shared with anyone outside of HSNM.

The deadline for application is May 1, 2018. There will be a personal interview for the finalists between May 10 and 15. The winner will be announced on May 26 at HSNM’s May Speaker Meeting, to be held at Botts Hall, Special Collections Library, 423 Central Ave. NE, from 10:00 a.m. to Noon.

The winning essay will be published in HSNM’s June 2018 Newsletter.

Keeping Our Eyes on the Prize = Equality

Sponsored by: Albuquerque-NOW, SWLC, League of Women Voters, AAUW, Albuquerque Center for Peace and Justice, SWOP, and others

Free and open to the public
For more information: now.abqnm@gmail.com

* honoring the importance of women in developing our democracy and building our state
* recognizing the role that young feminists play in shaping our future.

The Program will have a diverse group of speakers who will highlight the ongoing work to achieve equal rights by:

* ensuring existing laws to protect women’s rights are strengthened and enforced, and
* new laws to address unequal treatment based on gender are enacted.

~~Participating organizations will have information tables along the East Hall~~

Participants and the public are invited to visit all our NM legislators to thank them for their work on behalf of women and ask for their support for the work that still needs to be done.

Anthropology at UNM and Around the World- August 27 Speaker Meeting

Anthropology at UNM and Around the World, OR
Canteens Through the Ages

Kristina Whitney will be guiding us through the exciting research  going on in the Anthropology Department at UNM. She will also share with us some of her own research on canteens. The history behind their origin is complex and global, and underscores how quickly the world became interconnected as North and South America were being explored and colonized.

Kristina Whitney is in her final semester of studies for her MA in public archaeology at UNM. Her thesis is on settlement patterning of pastoral groups in southeastern Ethiopia, with the aim to aid in establishing an archaeological baseline for an understudied area in Africa.

Other research interests include the origin and use of a specific canteen style in the American Southwest, and the connections of that style to canteens in the Mediterranean and Middle East. She is working on a publication for that research now, but it has not yet undergone peer review.

Kristina is also interthat has beenested in how archaeology is perceived by the public and how it can be utilized to foster a sense of community and sense of place, while also realizing that archaeology needs to gain a larger part of the public interest as a science in order to maintain relevance within the current congressional atmosphere.

She obtained her BA in anthropology at the University of Nebraska- Lincoln, where her senior thesis focused on Byzantine water jugs. She’s been able to maintain her interest in water vessels through her canteen research, while also maintaining a global outlook on archaeology as a tool for investigative discovery. She grew up around Tucson and spent most of this summer on an archaeological survey of national parks in southeast Arizona.

Come to a Rally at Civic Center Plaze in Albuquerque
Friday, August 26 between 11 AM and 1 PM

Over the past few years the Humanist Society of NM and the Albuquerque Chapter of the National Organization for Women (NOW) have held public celebrations of Women’s Equality Day to remind all citizens that the right to vote comes with the responsibility to vote and that our work for women’s inclusion as equal partners with men in our country will not be done until the Equal Rights Amendment, written by Alice Paul in 1923, is ratified by 38 states and added to the Constitution.

The Southwest Women’s Law Center, in collaboration with Abq-NOW, League of Women Voters and other women-focused local and statewide organizations, will hold a rally at Civic Center Plaza in Albuquerque on Friday, August 26 between 11 AM and 1 PM. The event will feature real-time linkages via Skype, Facebook and Twitter with women from all 33 counties in NM projected on a jumbotron. The women will speak about issues of concern that impact their lives and the lives of women in their communities.

The objective of the celebration is to get women to vote and vote their mission, whatever it is. To that end it will focus on getting every woman, who is eligible, registered to vote with an emphasis on 17-year-olds who will be 18 by November 8, 2016.

There will be no political speeches nor promotion of any candidates or platforms. Ultimately, the goal is to build a community of strong women who will rise up, get engaged, and get to the polls in 2016.

For more information and to participate in this event, please contact Pamelya Herndon, Executive Director SWLC, at 505-244-0502 or pherndon@swwomenslaw.org .

On June 4, 1919, Congress, by joint resolution, approved the woman’s suffrage amendment and sent it to the states for ratification. The House of Representatives had voted 304-89 and the Senate 56-25 in favor of the amendment. It had taken 71 years, since the Seneca Falls Declaration of Sentiments, to get to this point.

The national campaign to have the amendment ratified by 2/3 of the 48 states was led by suffragists, Alice Paul and Carrie Chapman Catt, who used different tactics but got all the states needed for ratification by August 18, 1920. Women’s right to vote in the US became the law of the land when it was added to the Constitution on August 26, 1920.

In 1971 Bella Abzug, Representative from New York, was successful in having a bill passed in Congress to have August 26 recognized annually as Women’s Equality Day.

For more information and to participate in this event, please contact Pamelya Herndon, Executive Director SWLC, at 505-244-0502 or pherndon@swwomenslaw.org .

Mysteries of the Roundhouse Revealed!

What’s New in the NM Legislature

Saturday, May 28, 10 am to noon
Botts Hall, Special Collections Library, 423 Central NE, ABQ
Free and open to the public

In May our speaker will be Gwyneth Doland, a multimedia journalist with New Mexico PBS, KUNM Radio, and New Mexico in Depth. She will be filling us in on all of the goings on at the Santa Fe Roundhouse. Come and find out what your legislators are up to!

You may know Gwyneth from “New Mexico in Focus” on PBS.  She covers government and politics on the radio, television and online for the grant-funded People, Power and Democracy project. She is also an adjunct lecturer in the Communication and Journalism Department at UNM.

Gwyneth investigated corruption in state government in 2015 and 2012 for the Center for Public Integrity in Washington, D.C. She was previously the executive director of the New Mexico Foundation for Open Government, the editor of pioneering online news site, The New Mexico Independent, and a staff writer for the Santa Fe Reporter and the weekly Alibi. She is a former director of the Journalism and Women Symposium and the Society of Professional Journalists Rio Grande Chapter.

Planned Parenthood: What is it and What’s going on?

Subjects like funding, procedure bans, “witch-hunts”, legislation, what’s upcoming for 2016, and how you can get involved. Come and hear an informed speaker on these subjects– it’s going to be a great talk.

A native New Mexican, Marshall has spent a majority of his life as an organizer, even when he didn’t know what that was. Working in HIV/AIDS Prevention and Awareness as a teenager in Alamogordo New Mexico, Marshall learned at a young age how important comprehensive and responsible sexuality education is, and in this work was able to draw the connection beyond sexual health to emotional and mental health for teenagers.

After moving to Albuquerque in 2001 he began a formal career in political and community organizing, working for organizations like the League of Conservation Voters, AFSCME Public Employees Labor Union, and serving multiple years on the board of Equality New Mexico. Marshall’s passions have always been strong on the issues of Reproductive Healthcare Access. Being raised by a strong mother, and having two younger sisters, he sees the sacredness of Women’s Bodies and destinies and works hard to ensure their choices about them are respected.